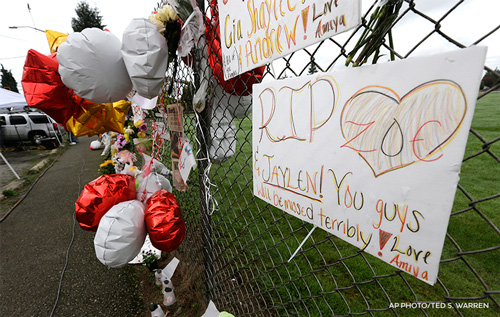 The shooting that killed two students (and the shooter) at Marysville (WA) High School last week shocked everyone. At first when it appeared 15-year-old Jaylen Fryberg was the shooter, that made it all the more shocking.

But, it turns out, there were hints of the anger and anguish in his soul.

That's where he spilled his romantically broken heart, his despair, his rage.

Social networks have become the new place to dump the contents of your heart. Even the dark stuff. Catharsis, but no cure.

The authorities and talking heads will be analyzing this shooting for a long time. Teenage angst. Gun violence. Warning signs.

For my account, I find myself asking what we can learn about handling life's most shattering moments. Without making tragic choices.

Buried pain is a ticking time bomb. A lot of us were raised to believe that our pain and brokenness is best kept inside. Behind an "I'm fine" mask. While a volcano builds inside.

Grief ... anger ... desperation ... feeling alone - stuff them and they just keep growing. Morphing into an emotional monster. Until it explodes, doing irreversible damage. Like the eruption at Mt. St. Helen's years ago. The explosion didn't last long. What was blown away is lost forever.

Treat the wound before the infection sets in. Talk about it when the wound is fresh. Before it submerges and starts to take over your heart.

3. Don't take it to someone who's in the same swamp.

But "they get me." When we're broken, we don't just need someone who will give us sympathy. We need the objectivity of someone who's completely outside the situation. Who can help us see the big picture. Because pain distorts reality, convincing us that this wound will never heal. That everything's dark.

But there's never been a winter without a spring. Or a sunset without a sunrise. We need someone with perspective - #hope.

4. Have your "go to" person before the storm hits.

When you live in "Tornado Alley," they tell you to "know where your shelter is before there's an emergency." That's a good idea emotionally, too. Decide what wise, objective person you can trust with your deepest, darkest feelings. As soon as they hit.

I'm so grateful I found my "911" person. He's the one I've been able to trust with feelings I didn't dare tell anyone. Who has calmed my frantic soul when nothing and no one else could. Who has pointed me to hope when it looked like there was none possible.

He actually said, "The Lord has sent Me to bind up the brokenhearted." The Bible says, "He is close to the brokenhearted and He saves those who are crushed in spirit." The more broken I've been, the closer He's seemed.

And as far as having someone who understands? Well, no one's ever been more wounded, more broken than He was. Abandoned. Attacked. Crucified.

Of course, I'm not alone in finding refuge in the open arms of Jesus. So many people have, for a very long time, accepted His invitation to "come to Me, all you who are weary and heavily burdened, and I will give you rest" (Matthew 11:28).

But the King can.