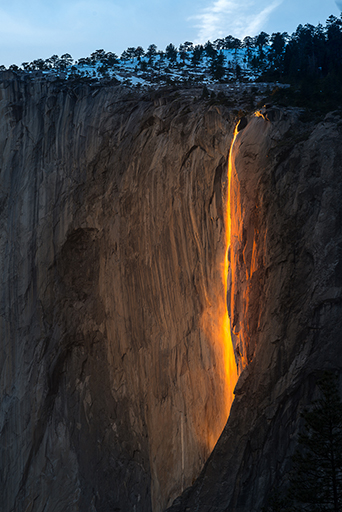 But at one time, fire was falling at Yosemite every summer night for nearly a century. Real fire. As a crowd of visitors gathered near the bottom of Glacier Point, a huge bonfire was set at the top. Eventually, a voice at the bottom hollered up four words - and the burning hot embers were spilled down the cliff, cascading 3,000 feet to the valley below. It was an "ooh, ahh" moment, for sure!

And the four words that released that unforgettable display?

I've never seen fire fall at Yosemite. But I've seen it fall in my own life. At crisis times. When I had done all that I could do - and it wasn't enough. They've been what I'd call "Elijah moments." We all have them.

This whole "firefall" idea all goes back to what may have been the most dramatic showdown in the Bible. Sort of a spiritual "Gunfight at the O.K. Corral."

God's people had become Baal's people - sold out to the worship of a pagan deity. God's prophet Elijah convened 450 of Baal's "prophets" on Mount Carmel for a daring spiritual confrontation. His challenge: we'll each put wood on our altar, then the pieces of a bull on the wood. "Then you call on the name of your god, and I will call on the name of the Lord. The god who answers by fire - he is God" (1 Kings 18:24).

Surprise - Baal never showed. In spite of 450 of his prophets shouting for him for hours - even slashing themselves to get his attention. "But there was no response; no one answered."

Then Elijah not only put the bull cutlets on a wood-covered altar, but then he had four giant jars of water poured over the sacrifice. And he prayed: "Let it be known today that you are God in Israel."

Then seven words that make me smile - big: "Then the fire of the Lord fell." It consumed the sacrifice, the stones of the altar and the water that had filled a trench that surrounded the altar!

That's a firefall to beat all firefalls!

Which brings me to my own Elijah moments. "Impossibles" that we all face sooner or later. Where all our efforts, all our experience, all our gifts just cannot change things. That person whose heart seems so hard that they'll never change. The desperate financial straits. The marriage you can't fix. The medical diagnosis that seems hopeless. The need that you can't meet. The person you can't fix. The condition you can't cure.

It's an Elijah moment. Where you've done all you can do. Now your only hope is if God does what only God can do. So you stand back, totally let it go and pray something like this:

In other words, "God, it's gotta be You or it isn't going to be!" That's when God often shows up with the "fire" - that supernatural intervention that suddenly changes everything. Demonstrating again that God can do in a day what man could not do in 50 years.

Sometimes His "fire" has fallen and transformed that person or that situation. Other times the fire has fallen on my own heart - and changed it. Suddenly, there was peace. There was direction. There was a breakthrough. In me.

Someone reading this is at the weary end of all they can do to change things. Please don't stop storming God's throne of grace in prayer. Do all you can do. Put your offering on the altar.

And let the fire fall.