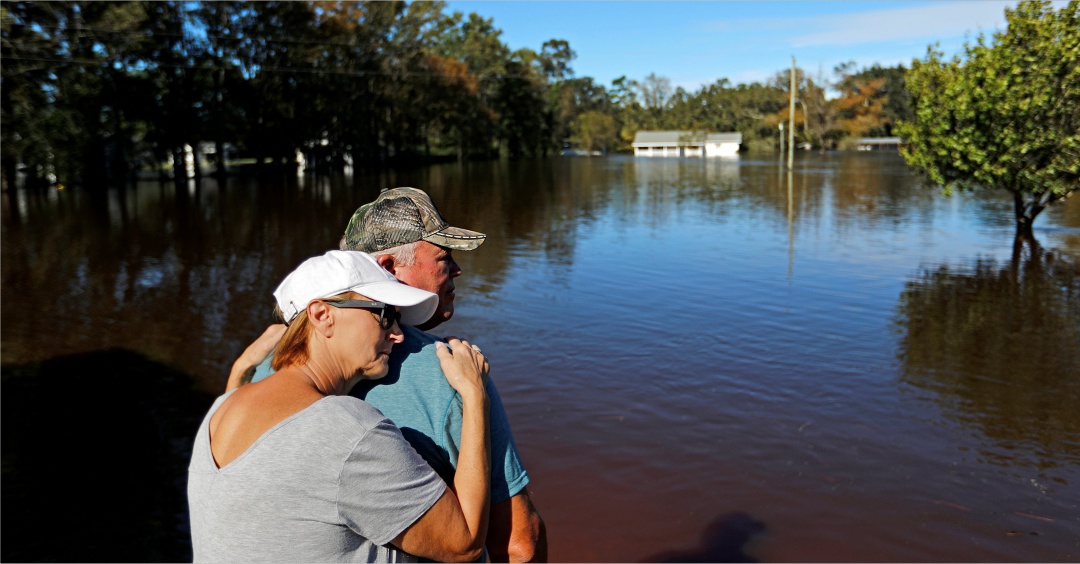 As I've been watching news reports on the delayed destruction from a storm that's passed by, I couldn't help but think of larger life lessons mirrored in this tragedy.

For example, most of us can look back on a warning we should have acted on - like folks who felt they didn't need to evacuate areas in Florence's path. Someone tried to warn us about a relationship, an ill-considered decision, a job, a purchase that we later regretted.

And as I've watched the floods that have followed the storm, I thought, "That's what I've been experiencing emotionally since my Karen's sudden Homegoing two years ago." Many people who grieve the loss of someone they love know exactly how that feels.

The storm of their passing hits hard. Caring people are there, lifting you up with their love. Then life returns to normal. But it's a new normal for the one in the center of the storm. For me, a life that's always been a duet suddenly became a solo.

The storm hits hard and passes by. Then comes the flood that will take an ongoing toll for years after. It happens after many of life's storms. The life-changing diagnosis or injury. The divorce. The financial tsunami. The severed relationship. The shame of a moral failure.

The Florence tragedy has shown me parallels with our other "life after loss" experiences. Life lessons that I should not forget.

Like, don't forget the wounded. I'm blessed to have dear friends who continue to "check in." But many people have to navigate the downstream effects of their "storm" on their own.

Realistically, we can't be everything for every "storm victim" we know. But we can stay in the lives of those God lays on our heart. By listening for His promptings to reach out to someone long after the casseroles and calls and cards have ceased. It's a divine mandate to "share each other's burdens and in this way obey the law of Christ" (Galatians 6:2).

We move from "selfie" smallness when we wake up each morning and ask, "Who needs me today, Lord?" That positions you to be God's "UPS driver," delivering His love to someone who really needs it today. And to be one who remembers the wounded one when most have moved on. If you want to know if someone needs more than a passing wave and smile, don't just ask "How are you doing?" Ask the second question. "Really?" Often you'll hear the struggle behind the smile.

The pain of Florence's fury also pointed me to a question for the one who's been hit by the storm. "Do I need to move to higher ground?" For some, that may mean moving away from people, places, temptations, influences that make us vulnerable to getting wiped out again. And making a new beginning, outside the "flood zone" where you're likely to be hit again. For others, it may mean relocating our "go to" place from things and people we can lose to the "higher ground" of the God whose love is indestructible and "unloseable."

One account from Florence's aftermath was a sobering reminder of another critical life lesson. USA Today recounted the story of a man living in Newport, North Carolina whose home had remained unaffected by flooding for 25 years. Until Florence. As a torrent of black water poured down his street, water began to rise rapidly in his home. He and his two dogs were trapped and running out of hope.

He was actually considering suicide when he looked up and saw the rescuers headed his way. Hope got there just in time.

For many in the flooding that follows the storm, hope has been a rescuer. From the eternity perspective of the Bible, that's a reality that calls each follower of Jesus to action.

According to the Bible, we are all "without hope" because we're "without God" (Ephesians 2:12). It's not that God left us. We've all "gone astray" and "each of us has turned to our own way" (Isaiah 53:6). As spiritual hijackers, running a life God was supposed to run, our only hope is the greatest act of love in human history - the death of God's Son, Jesus, "as a sacrifice to take away our sins" (1 John 4:10).

We never know the quiet desperation of the people around us. Or how close they may be to their appointment with God. But we who follow Jesus do know we have in the Message of Jesus' love the only hope of a spiritual rescue. Our responsibility to give them Jesus is as life-or-death as the swift-water rescuers urgently seeking storm victims in danger.

I know, in the most intimate way, that there is only One who can walk with us through every trial, every tear, every tremor of the long aftermath of our storm. Jesus promised, "Never will I leave you; never will I forsake you" (Hebrews 13:5). I am living that promise as never before. He's there in the daytime. He's there in the nighttime. He hears my heart when others can only hear my words.

Put simply, that day years ago when I put myself in Jesus' hands was my last day alone. Ever.