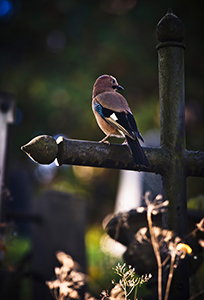 I've spent a fair amount of time in graveyards.

Looking for some missing "leaves" on our family tree. There's even a "find a grave" website. Run by some folks who've obviously spent a lot more time in cemeteries than I have!

And I actually found a lot of ancestors' graves. Which filled in a lot of genealogy blanks.

A graveyard's a logical place to go looking for history.

It's a strange place to go looking for hope.

But it turns out that the epicenter of hope for the human soul is actually in a graveyard. Where there's an empty tomb.

A borrowed grave - where a man crucified by Roman executioners was hastily buried. A tomb sealed with a massive stone by order of the Roman governor. He issued what turned out to be one of history's most ludicrous orders - "Make it as secure as you can."

That was Mission Impossible.

Because the brutalized man behind the stone was Jesus of Nazareth. The Christ. The Son of the Most High God.

Who, as the dawn banished the night that Sunday morning, walked out of His grave. Vanquishing what has stopped every human who's ever lived - death. Validating His most audacious claim: "I am the way, the truth and the life" (John 14:6).

This Easter I will stand by another grave. A new grave. Where I could say as my wife's casket was lowered, "See you soon, baby." "Soon" - as reckoned on an eternity calendar.

This is not some solace-seeking "she's in a better place" sentiment. No, this is the certain reality the Bible describes this way: "He has given us new birth into a living hope through the resurrection of Jesus Christ from the dead" (1 Peter 1:3).

When this Jesus says, "I am the resurrection and the life; he who believes in Me will live, even though he dies" (John 11:25) - it's guaranteed by the event that changed everything.

And since He conquered death, then whatever's bigger than I am, He is bigger than it is! His resurrection makes impossibles possible. Undoables doable. Unbearables bearable. Hope for "hopeless" begins at that empty tomb.

Jesus was that Someone else. Because I could not, in a hundred righteous lifetimes, pay the death penalty my sin requires.

Whenever Jesus prayed, He called God "Father." Except when He was hanging on that cross, taking all the hell of all my sin. There He cried, "My God, my God, why have You forsaken Me?"

Because, at that moment, the Son was cut off from the Father as He carried my sin. God turned His back on His Son so He would never have to turn His back on me.

Then, on the third day, my crucified Jesus blew the doors off death! For me. For all who would put their trust in Him.

Because there was that Resurrection, there's going to be a reunion!

Two graves. One in Jerusalem. One just down the road. Burials separated by 2,000 years. But my hope begins at the one and transforms the other.

Jesus is gone from His grave. My baby is, as the Bible says, "absent from the body, at home with the Lord." Because Jesus is the Death-Crusher.

So life no longer ends at a grave. It begins there.