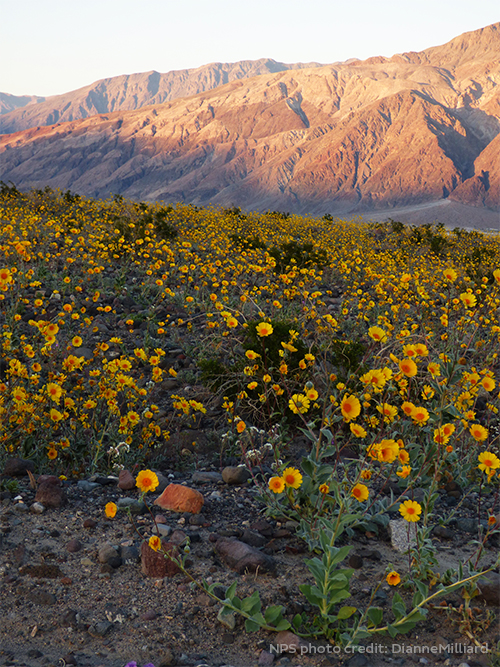 If I wanted a picture that screams "Easter!" this year, I'd go to Death Valley. Which suddenly looks like "Life Valley."

Because of the "superbloom"! Millions of super-sized, glorious flowers have exploded in one of the driest places on earth. It's the lowest point in the U.S. with an average of two inches of rain a year.

But this year it's a sea of purple and pink blossoms. And the blazing yellow of what they call "desert gold."

Thank you, El Niño! Three times the normal rainfall, plus warmth and mild winds. And, as one headline says -

The day the crucified Jesus blasted out of His grave, leaving death quivering on the ground. The enemy that had conquered every human who ever lived. Dethroned.

And the long dark valley we call death was suddenly alive.

And a billion funerals have never been the same. Because this death-beating Savior promised, "Because I live, you will live also" (John 14:19). In the Bible's words, death has lost its sting. Those who follow the risen Christ follow Him right through "death valley" into the glories of His heaven.

So the superblooming glory of Death Valley becomes, for me, a picture of the deeply personal meaning of Easter.

1. There is no place so dead that life cannot bloom.

A broken family. A broken heart. A despairing spirit. A "hopeless" situation. When Jesus walked out of His grave, He conquered the greatest "hopeless" of all. So when we invite Jesus into our "valley of death," He brings with Him the power that crushed death. Miracle-working power. The resurrected Christ said, "I have been given all authority in heaven and on earth" (Matthew 28:18). Hopeless is not in His vocabulary.

2. A million seeds are waiting to bloom.

Seeds deposited in someone's heart when they heard about Jesus. Maybe as a child. From a friend. In church. They've heard the good news that the sins we deserve to pay for were paid by Jesus when "He carried our sins in His body on the tree" (1 Peter 2:24). They've just never made this Savior their personal Savior. But then the storm comes. We see how much we need Him. The storm awakens the slumbering seed. And the Jesus we knew about becomes the Jesus we know!

One park official said, "Death Valley goes from the valley of death to the valley of life." There it is! That's what Easter has done! That's my future! And the future of everyone who belongs to Jesus.

Because Jesus said, "I am the resurrection and the life. He who believes in Me will live, even though he dies" (John 11:25). So "even though I walk through the valley of the shadow of death, I will fear no evil, for You are with me" (Psalm 23:4). Because Jesus is alive, my last breath on earth will give way to my first glimpse of heaven.

To paraphrase D.L. Moody, a great preacher of another generation - "When you read some day that I am dead, don't you believe it! Because, at that moment, I'll be more alive than I've ever been before!"

Jesus is alive. Death has lost. Life will win.