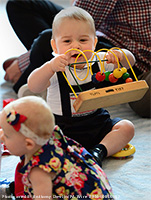 I guess you'd expect it. After all, his parents' wedding was the most watched on the planet.

And now Prince William and Princess Kate have an adorable son. Baby George. The most watched baby on the planet.

Every time he's out in public, the press is all over it. Most recently, as he traveled to New Zealand with his royal parents.

The big news there? Baby George's first "play day." In a sea of toys. Where the eight-month-old managed to find and commandeer the biggest toy in the room.

Obviously, this is a special kid. Because he's royalty.

Every baby in this world is a special child. Because they're royalty.

Baby George is a royal child because his father is royalty.

But, then, every baby is from royal descent.

From the Great King. The Creator - and Ruler - of 100 billion galaxies.

I've had the very moving privilege of being there when most of my grandchildren were born. In that priceless moment when I held each newborn in my hands for the first time, I called them by name. And told them exactly what the Bible says about who they are.

"You are God's workmanship." Every baby is.

And they're each an original. "Knit together in their mother's womb...fearfully and wonderfully made," as Scripture puts it. And I read there that God calls His children "My sons and daughters."

Most "royal" children won't be in the headlines. But each one is a treasure. A masterpiece.

I find that more than just some nice poetic thought. There are some pretty profound implications to seeing every child as incalculably valuable.

1. The circumstances of conception have nothing to do with the worth of the child.

If our worth comes from our Creator, than it's intrinsic. A $50 bill - folded, crumpled, trampled - is still worth $50. No amount of mistreatment or rejection can diminish value that's Creator-given.

3. The mission of a parent is to so raise their children that they know and feel how much they're worth.

Constant criticism, comparison or shaming makes a child feel like a paper plate. And paper plates get thrown away. But God only makes fine china. To be reserved for special purposes. As a dad, my great mission must be to be sure my children know they're fine china.

So if every child's a royal child, it's pretty important how I treat them. How I value them.

The King is watching.