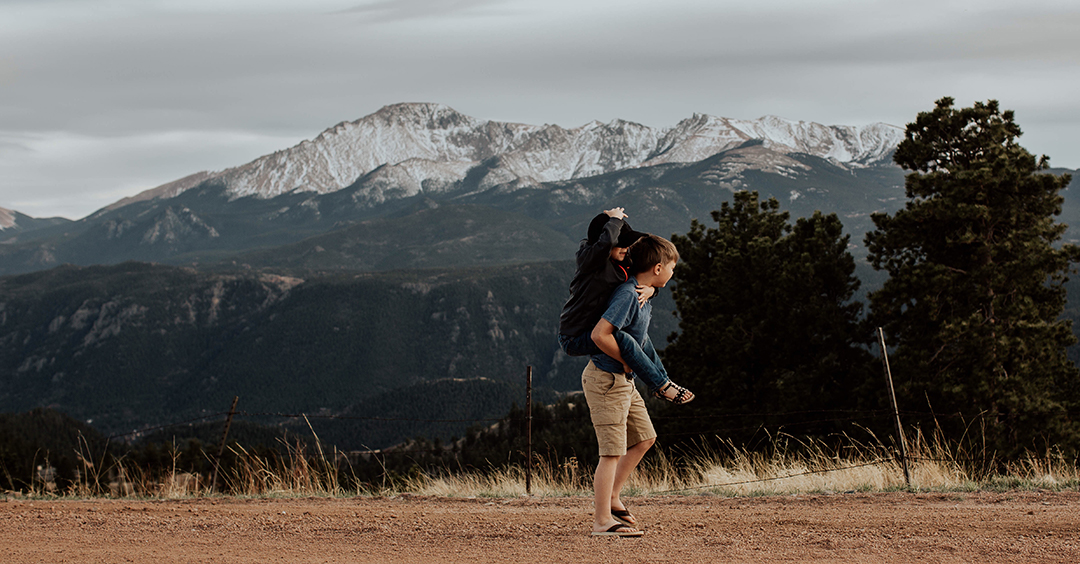 I'm Ron Hutchcraft and I want to have A Word With You today about "How to Carry the People You Need to Carry."

So oldest grandson learned something that day in the woods: "I can carry my brother - with help from above." So can you. It may be that at this time in your life you've been assigned by God to carry someone who can't make it on their own. Or maybe you've got more than one person to carry - even a bunch of people.

You're living our word for today from the Word of God. It's in Galatians 6:2. Your Lord's command is: "Carry each other's burdens, and in this way you will fulfill the law of Christ." See, when you pick up the burdens of someone God leads you to help, you're living out the life of your Savior and you're making Him proud.

That doesn't mean the load doesn't get pretty heavy sometimes, honestly even overwhelming and nearly unbearable. There's only one way you can do this. The only way our grandson could have his little brother on his shoulders. You have to depend on help from above. And since carrying someone else is a divine mission, you can release the weight to a Heavenly Father who is so much stronger. In fact, in Psalm 55:22, He gives you this invitation: "Cast your cares on the Lord and He will sustain you; He will never let the righteous fall." That means casting the cares of those you're carrying on Him, too.

Long-haul carriers learn the strange secret of what I call compassionate distance; offering yourself lovingly and wholeheartedly to that hurting person you're with, but leaving them completely in God's hands then, and especially when you're not with them. You're not supposed to carry them all the time. And they'll never learn to walk on their own if you get a "messiah complex" and act as if you're their Savior. That's called codependency, not burden-bearing.

Just as God enlarges the capacity of a single kidney, you know, to do the work of two kidneys when one is removed, well God will enlarge your capacity to carry a load you never thought you could handle. If you go to Him consistently for His sustaining grace, you're going to feel that miracle.

Daily, you need to download His promise in Isaiah 46:3-4 - anchor verses of mine. "I have upheld you since you were conceived and have carried you since your birth. Even to your old age and gray hairs I am He, I am He who will sustain you. I have made you and I will carry you; I will sustain you and I will rescue you." WOW! That is a promise of heaven's support that has no loopholes, it's without interruption, it's without limit. After all is said and done, you can carry someone else because someone stronger is carrying you.

Or as a great old Gospel song says, "When we have exhausted our store of endurance, when our strength has failed ere the day is half done; when we've reached the end of our hoarded resources, our Father's full giving has only begun. His love has no limit, His grace has no measure, His power has no boundary known unto men; for out of His infinite riches in Jesus, He giveth and giveth and giveth again."

Lyrics from "He Giveth More Grace."