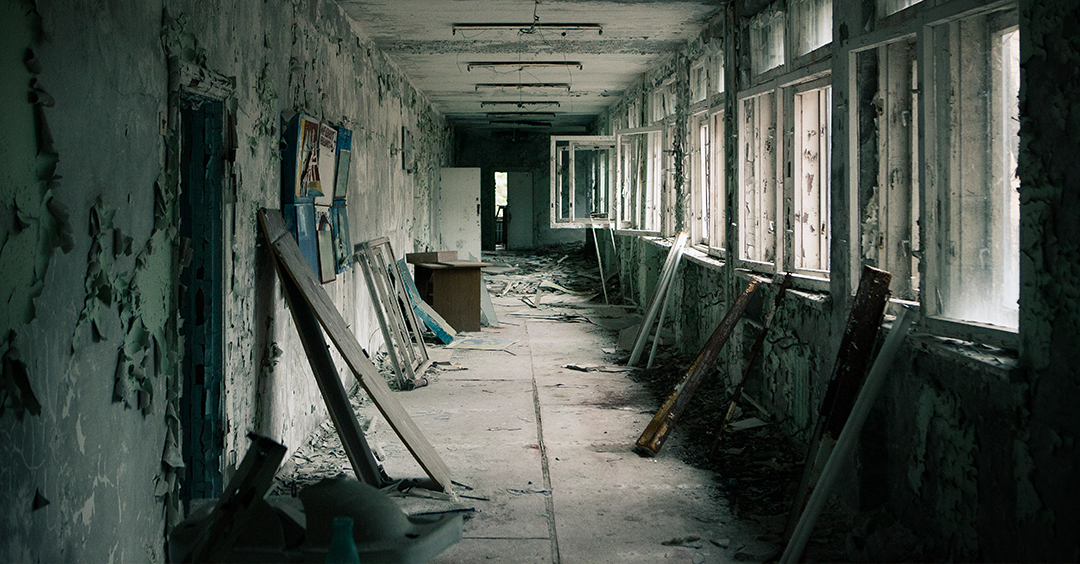 Oh, it happens every year! The cinema's "beautiful people." Yeah, they're there for Hollywood's annual celebration of itself. It's all about that little gold guy they call Oscar.

Well, for some reason, the Hollywood news takes me back to a tour that our family did at Universal Studios some years ago. The tram took us through some scenes that would be familiar to veteran moviegoers - like a street in 1920s Chicago (you know, like Al Capone style?), or an Old West town. Yeah, there was a World War II French village. Impressive stuff.

It made you want to go into some of those buildings and check it out. Don't bother. When you open the door, there's nothing there. It's only a set. It looks really good on the outside, but it's empty on the inside.

I'm Ron Hutchcraft and I want to have A Word With You about "Why We're So Empty."

Now, sadly, there are a lot of lives like that. The outside looks great: smiles, style, success. Just don't open the door.

Years ago, I was working with our local high school football team, and they actually won the state championship. And I had some good relationships with the players, and I took one of their star linemen out to lunch after he had won it all. And we're talking about his aspirations for his senior year and he said, "Ron, when I was a junior I had three things I wanted. I wanted to win a championship, I wanted a scholarship, and I wanted lots of friends." I said, "Yeah." And he said, "Man, I got 'em all." I said, "That's awesome!"

Well it was crazy. I'd never seen this guy with tears in his eyes, even when he was on the sidelines experiencing a lot of pain in the game. But he had tears in his eyes right there in a restaurant. And he said, "Ron, I got everything I wanted." And then he said, "Why am I so empty?" I'll tell you what...that's a question that lurks behind the "set" in a lot of people's hearts, "Why am I so empty?"

The woman Jesus met at a well one day; she was one of them. As her story unfolds, we learn that she had a lot of men in her life. We can guess she was pretty attractive and even pursued. Well, she came to that well to draw water. And Jesus said, "Whoever drinks this water will be thirsty again."

Think about those words, "Thirsty again." See, that's the problem with every "well" we go to for satisfaction in life - we inevitably end up "thirsty again." For this woman, every relationship - every guy - had been a well that left her empty inside. But then Jesus said, "Everyone who drinks of the water I give him will have in him a well of water springing up to everlasting life" (John 4:14). Wow! Well, that day, that woman traded never-lasting for everlasting.

Now, that's not an easy offer for Jesus to make to us. See, He's still making that offer to all of us thirsty people, because the hole in my heart is so big that only God can fill it. But for Jesus, it meant going to a cross to pay for the sins that separate us from God; that make a wall between us; that caused God to say in the Bible, "Your sins have separated you from your God." That's in Isaiah 59:2. So, here's this wall between me and the God whose love I was made for, who knows the reason I'm here, and who has the keys to the heaven I want to go to someday.

But Jesus came and made the offer after a life of never-lasting things. "I can give you that which is everlasting. I want to put the well inside you so you don't have to depend on something outside you ever again." And He's the well.

I wonder if there's ever been a time in your life when you've finally actually opened up your heart and said, "Jesus, I'm Yours"? You may be religious and you may really do a lot of Christian things, maybe you know a lot of Christian teachings, but there's never been that moment when you've made Him yours. Why don't you get that done today? Tell Him that today. Tell Him, "Jesus, I'm yours."

Maybe you'll go to our website. I want to invite you to go there because I think you'll find some help in making sure that you belong to Him. The site is ANewStory.com. Check it out today.

Life with Jesus is more than a hollow set. Because inside there's life.