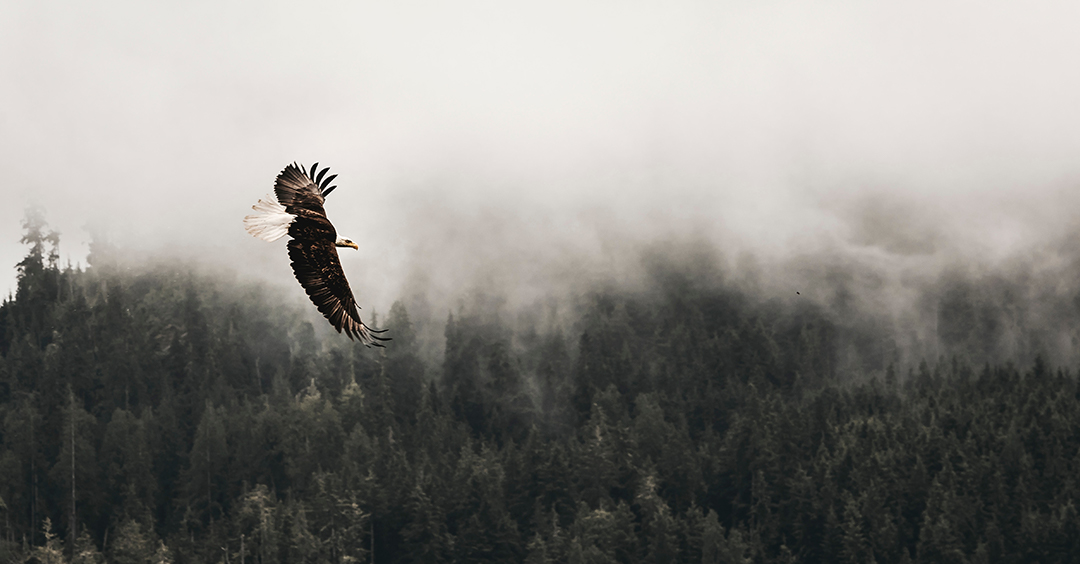 I read once that Benjamin Franklin had nominated the turkey to be America's national bird. With all due respect to our wonderful founding father, I'm glad Ben got outvoted on that one, aren't you? I'm glad they picked the American eagle. What a majestic bird! They're even a good example for us humans! They mate for life, they build a family home called a nest to last for life, and they do a good job raising their kids. Veteran eagle watchers have told us that Mom and Pop eagle cover the floor of their nest with feathers and fur and, you know, soft stuff for their little babies. And then one day that little eaglet ventures outside the nest for a little walk on the cliff. And that's when the renovations start. Mr. and Mrs. Eagle start removing the fur and the feathers from the nest. When the eaglet returns from his little stroll, he returns to a nest that doesn't feel as good as it did before. Oooh, ouch! He's resting on sticks and stones now. Suddenly the comfy nest isn't comfortable anymore. Actually, this is the first step in getting that eagle to do what he otherwise might never do. What he was born to do - fly!

I'm Ron Hutchcraft and I want to have A Word With You today about "Born to Fly."

Now God likes eagles, too. He talks about them many times in the Bible. One of them is in Deuteronomy 32. I'll begin reading at verse 10 - it's our word for today from the Word of God. Speaking of his leadership of some of the believers in the past it says, "He shielded him and cared for him; he guarded him as the apple of his eye, like an eagle that stirs up its nest and hovers over its young, that spreads its wings to catch them and carries them on its pinions. The Lord alone led him." How does he lead him? Well, part of his leading of him is to stir up the nest.

Maybe that's a fair description of what's been happening in your life recently? Your nest isn't as comfortable as it used to be; you're restless, and maybe even hurting. It's obvious something is going on but you haven't been able to figure out what it is. Well, it could be that your loving Father is stirring up your nest. Why? The same reason the father eagle stirs up the nest of that eaglet...to move you out of your comfort zone so you can fly! God's moving you to do what you were made for, but you don't know it.

I remember a call we got from our son just a couple of weeks after he had followed the Lord's leading to go work for the Lord among a tough southwestern Indian tribe. He was just out of college, obeying the Lord's call, but without much that folks would call security. Believe me. He had actually broken an engagement a few months earlier because of his calling. He'd been sleeping on a table in a church storeroom, that's all he had to start with. He was totally depending on the Lord to support his daily needs.

He called early one morning and he said, "Mom, Dad, you know when I was in college and I needed friends, they were right there. If I needed a girl, not a problem, and If I needed money, I knew what I had to do." He said, "I don't have any of that here and I'm really lonely." You know, we're parents. We're like, "Oh, boy." But then he said, "I have never had such peace and contentment like this in my whole life." And then I will never forget what he said after that, "Because I am where I was born to be."

I'm sure if Papa Eagle told that eaglet that he was going to hang out there in mid-air and fly, that baby would say, "No way I'm doing that." But then comes the discomforting of his nest! If your comfortable spot is suddenly getting uncomfortable, it's time to be asking, "Lord, what do you want me to do?" I'm ready for whatever you have for me.

See, He's moving you to what you were created for. Which wasn't to spend your life in the nest. No, you were born to fly!