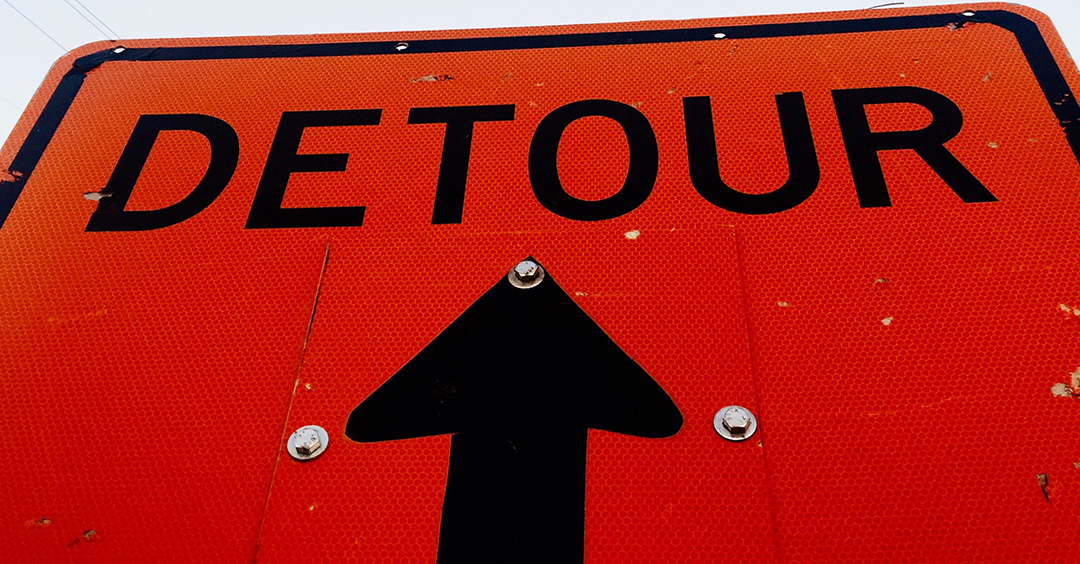 You pay a lot more attention to a story on the news when it might involve someone you love. It was that way the night we saw a story about a major rockslide that closed a stretch of Interstate 70 in Colorado. Our son and daughter-in-law and little granddaughter were driving that very day through that part of Colorado. The rockslide had shattered the pavement, and it embedded boulders as deep as six feet into the highway and created craters in the road. Some of the boulders were said to be as big as a van. Obviously, it was going to take some time to get that stretch of the highway open again, which meant a 200-mile-plus detour around the closure. That was okay with our family. In fact, my son said they saw some spectacular scenery they wouldn't have seen any other way. Not long before the rockslide, a semi had jack-knifed just west of that area and the interstate was closed because of it. I've been in those miles-long traffic jams (maybe you have too), and you can really get frustrated, aggravated, and just ugly. But because of that frustrating delay, there was no traffic on the road when that avalanche of rocks came crashing down. You've got to figure that might have just saved lives.

I'm Ron Hutchcraft and I want to have A Word With You today about "Divine Delays."

If you're like me, patience is one of those areas in which you are, to say it nicely, under construction. We don't like to wait. Our lives are busy, they're full, and we hate delays. Many times the delay is actually part of the plan to protect you from something that could hurt you if you stayed "on schedule"; on your schedule, that is.

You can see God's protective delays at work in our word for today from the Word of God. While it's a chapter out of the lives of God's ancient people, it might shed light on why God seems to be taking you the long way around right now. The story is in Exodus 13:17-18. The Jews have just been miraculously delivered from slavery to Pharaoh in Egypt, and they're ready to be on the interstate to the Promised Land.

Here's what happened and why. "When Pharaoh let the people go, God did not lead them on the road through the Philistine country, though that was shorter. For God said, 'If they face war, they might change their minds and return to Egypt.' So God led the people around the desert road toward the Red Sea."

So, God's people are purposely slowed down by God, and then that longer road leads to what appears to be a disaster. They're trapped at the Red Sea with the Egyptian Army bearing down on them. Now it might be that God is taking you the longer, slower way right now. You were, like those people on the interstate that was suddenly closed, speeding full speed ahead. Suddenly, all you can see is this ocean of red brake lights in front of you. You're waiting, and you don't know why.

It's because God knows what's up ahead and you don't. And He's protecting you from a battle up there that you're not ready to fight, from danger that might hurt you, from a temptation or a test for which you're just not yet strong enough. Remember, He's promised not to let you face more than He knows you can bear. Maybe you've prayed these words many times, "Lord, 'Lead us not into temptation, but deliver us from evil.'" And the reason you're waiting or taking what seems to be a detour is because your Father, who art in heaven, is answering that prayer!

And if the delay and the detour bring you to a Red Sea, not to worry! He's leading you, not into a mess, but into a miracle you'll never forget! So learn to relax when God closes the road or suddenly slows you down. It's all about His love for you, a love that knows what's best for you, a love that knows what's going to happen if you keep going the same direction at the same speed. So don't sit there, pounding the steering wheel and fuming. You aren't late. In fact, you're right on time - God's time. And this isn't Plan B. This is what God's Plan A has been all the time.

So trust the One who plans the trip; who protects those who belong to Him. If you could see what's up ahead, you would be so grateful that God has made you wait.